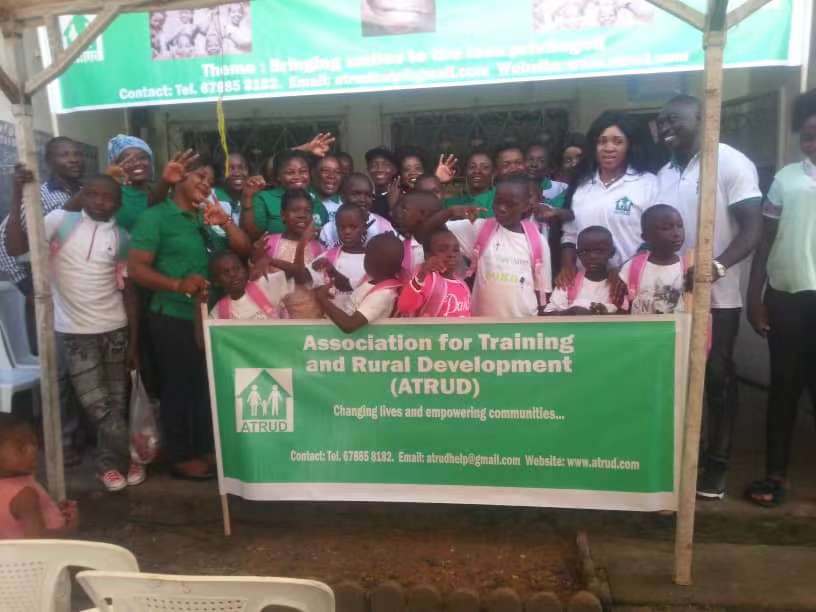 The Association for Training and Rural Development (ATRUD), a humanitarian NGO with headquarters in Douala – Cameroon, has launched activities marking the 2019 end-of-year festive season with a visit to the Trinity Foundation orphanage in Douala, the economic capital of Cameroon. ATRUD’s Coordinator in Cameroon, Mr. Ebot Leonel Tabot and the team at the ATRUD head office organized the gifts-distribution ceremony at the premises of the orphanage.

About 100 participants attended the ceremony, which took place in the afternoon of Saturday November 2nd 2019. During the ceremony, 30 children were given school bags and the orphanage – The Trinity Foundation received food items such as rice, cooking oil, Maggie, canned tomatoes, salt, etc. worth over 150,000frs cfa. Other items distributed included clothing and sanitary tissues. Overall, ATRUD spent over 500,000frs cfa on the items distributed. The orphans, many of them from the conflict-hit regions of Cameroon are in dire need of school supplies as well as food and medical care. Pastor Odette Yengwaa Bongyu, coordinator at the Trinity Foundation emphasized on the need to give the children psychological support as many of them were traumatized.

Apart from distributing gifts, ATRUD has launched an aggressive end-of-year program. From forging partnerships with strategic partners and sponsors to recruiting skilled volunteers, the goal has been to help the needy in rural areas. In this light, ATRUD will be meeting more donors especially in China in the weeks ahead and organizing more fundraising campaigns.

A 40-feet container full of items from donors was shipped on November 2nd from the port city of Shanghai and is expected to arrive Cameroon in January 2020 thanks to SCECOM, the parent company that has been funding ATRUD since its creation. The Shanghai based culture exchange and communication company supports ATRUD as part of its extensive corporate social responsibility program focusing on persons in need in rural areas.

ATRUD’s founder Mr. Nsoesie Ernest for many years has committed time, money and human resources to improve life in poverty stricken areas. “We all have things we no longer need in our homes. People elsewhere badly need those things. We collect the things you no longer need or use and send to people who need them. I call it simple philanthropy. It doesn’t have to always involve the donation of millions of dollars.” Mr. Nsoesie said during a recent fundraising campaign in his residential community in Shanghai where he has championed community waste management initiatives.

More activities are planned for the months ahead as the festive season opens. The goal is to encourage donors, volunteers and well-wishers to help in educating other people around them on the importance of making humanitarian gestures no matter how small they may be. Some Press links about ATRUD end of year activities.